The Warrensburgh Woolen Mill was built by R. G. Herrick in 1873 at a cost of $3,650.  In the spring of 1885 R. J. Whitby, L.W. Emerson and T. J.
Eldridge (father of Milton Eldridge) became owners.  The mill performed every step of the process converting raw wool, through carding, spinning, weaving and sewing, to wearable garment.  From 1885 until around 1898, the Woolen Mill was run by R. J. Whitby and known as the Whitby Woolen Mill.  Mr. Whitby was a native of Great Britain and immigrated to the US around 1873.  By the fall of 1886, ground was broken for the new Woolen Mill, which was to be 44 feet wide by 120 feet long.  A wing 26 by 40 feet was to be built on the east side and 40 to 60 workers were to be employed at this time.  Around 1894-95, production was doubled with the building of an addition, 32 by 100 feet, in which nine new looms were added. At this time waterpower was improved through the construction of a 300-foot canal behind the mill. In addition, in 1895, the new Woolen Mill Bridge was installed and electricity was provided to the mill by the Warrensburgh Electric Light Works.  In spite of these improvements the business faltered and closed until new ownership was formed in 1899, and the business was renamed Warrensburg Woolen Company and Pants Factory.

Warrensburg Woolen Company and Pants Factory was formed in 1899 by Louis and James Emerson and T. J. Eldridge, whose son, Milton Eldridge, was put in charge of the business.  In 1900 another addition, 35 by 52 feet was added.  Production increased from 250 to 1,300 pairs of pants per week during 1900.  By 1905, ninety workers were using 200,000 pounds of wool to produce 100,000 pairs of pants. A new 40 by 120 foot, two-story building was to be constructed for the pants factory. New looms were added which more than doubled output.  In 1911 workers became members of Local 184, United Garment Workers of America.  Clothing would now bear the Union Label, and was advertised as such.  The union contract with the company was renegotiated annually.  However in the late 1920s issues over length of work week (the company wanted to return
to a 48 hour week) and piecework prices (the company wanted a reduction of 20%) resulted in the abandonment of the Union Label.  The union was disbanded on August 15, 1932.  Fierce competition and a nationwide malaise during the Great Depression resulted in operations being suspended in September of 1939.  World War II caused a resumption in late 1941 with the name of Warrensburg Woolen Fabrics, Inc.  The mill eventually closed in 1950. Warrensburg Woolen Company woolen blankets, coats and pants were known throughout the northeast for their quality and durability. 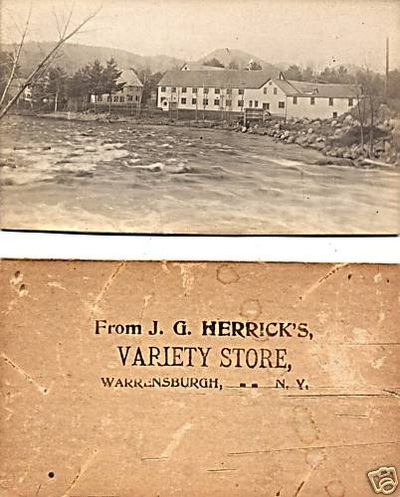 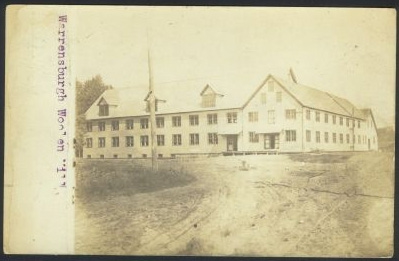 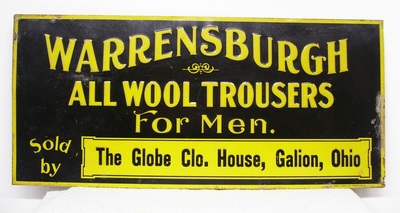