The Elms, named for the stately trees that graced the property, was built before the Civil War, about 1840, by Thomas S. Gray a partner of Colonel Burhans, for use as a store and tannery.  He had the house designed by an architect that he sent to Monticello, Thomas Jefferson's home, to garner ideas for his home.  Colonel Burhans purchased the property and made extensive alterations and additions to the place, and upon his death willed it to his daughter, Sarah H. Burhans.  She, in turn, left the property to her sister, Julia Isham, giving a life lease to her nieces, sisters Miss Clara R. Richards and Mrs. Mary R. Kellogg who also made additions to the property.  A fire occurred in the 1940s, at which time it was sold to Philip and Ethel Roberts, who added cabins and a swimming pool, renaming it the Colony House.  It has since been renamed, The Pillars.  The gracious elm trees, for which it was originally named, all succumbed to Dutch elm disease in the 1940s.

In 1852, William Bradley Isham (1827-1909), the son of Charles and Flora (Bradley) Isham, married Julia Burhans (1827-1907), daughter of Benjamin P. Burhans.  William and Julia's marriage would  result in four sons and two daughters; Charles Bradford (b. 1853), Samuel (b. 1855), William Burnham (b. 1857), Porter (b. 1863), Julia (b. 1866), and Flora (b. 1873).  After Mary Richards Kellogg died in 1918 and her sister Clara in 1924 (both were neices of William and Julia who had lifetime residency rights), ownership of the The Elms, the ancestral Burhans/Richards residence (now known as The Pillars), reverted to William Burnham Isham.  In January, 1925, William presented the town with a nine-acre parcel of land located on Library Avenue to be used as a public playground and park.  This is today's Recreation Field.  Until the late 1940’s, when it was partially destroyed by fire, The Elms was used as a summer home for various members of the Isham family.  Hannah B. Isham of New York City, widow of William Burnham Isham, was the last.  The property was sold to Phil and Ethel Roberts who restored the building.

The Pillars -  Originally a private residence known as The Elms, the property was sold following a fire to Phil and Ethel Roberts in 1950, who restored and renovated it and opened it to the public as an antique shop, then a coffee shop, a rooming house and motel named The Colony House.  In 1954 they renamed it The Pillars to avoid confusion with the Colonial Arms.  It was sold to Thomas and Beverly Sprague sometime in the 1960s, who enlarged the restaurant and added a bar.  Subsequent owners were Jean and Rudie Zieschang and finally Patricia McEwan and Ray Wassell.  No longer a lodging or restaurant, the converted motel units and main building now house retail and service businesses, as well as the owner's residence. 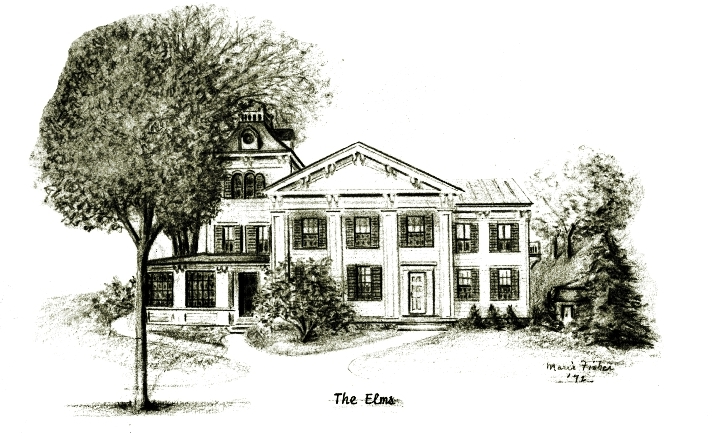 The Elms by Marie Fisher