This  individually listed  (1985)  National  Register property, known as the “Merrill  Magee  House,”  consists  of  a c.1835  original structure  with a c.1855, 2-story  main block.   The final  addition to the building occurred  after 1911,  at  which time a Federal  period farmhouse built in 1815 was moved from Thurman  Station  and attached  to the west end of the 1833  house  to be used as a summer kitchen.  This contributing building is significant for its architectural integrity as an intact and distinguished example of Greek Revival design,  and for its historic  association  with one  of Warrensburgh’s  most  prominent  families,  the Griffins.  The  house was  built by Stephen  Griffin, a leading entrepreneur  of the Warrensburgh-Adirondack Region,   who passed the property  on  to his daughter,  Mary Merrill, who later passed it on to Grace Merrill  Magee. Distinctive  features  include 2-story,   gable-front  form  with full-facade pedimented porch supported  by four square columns. An 1875  carriage  barn is on a separate piece of property.

The Merrill Magee  House, 2 Hudson Street, Warrensburg, is a large Greek Revival style residence sited amid historic out buildings on landscaped grounds.    Located immediately    southwest of the point where Hudson, Elm and Main Streets intersect, it occupies a central located on in this small Adirondack community:  Just to the north is    Warrensburg’s main commercial district,  while a residential district of moderate density lies to the south and east.  West of the Merrill Magee property is undeveloped woodlot and cleared land, historically associated with the Merrill Magee House but now subdivided and slated for development. 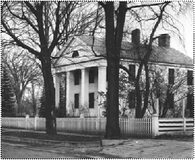 The Merrill  Magee House evolved in three distinct stages: the original structure on the property consisted of a 2-story, frame vernacular Greek Revival style farmhouse built circa 1835.    A two-story portico, Greek Revival style main block with giant portico was added to the east end of the original house circa 1855, at which time the earlier structure became the service wing.    The final addition to the house occurred after 1911, at which time a 1 ­ story, frame, vernacular Federal period farmhouse built in 1815 was moved from Thurman Station to Warrensburg and attached to the west end of the 1833 house.    This moved structure, used as a summer kitchen, had acquired historical significance as a component wing of the Merrill Magee House.    A shed­ roofed frame kitchen was also added to the northwest side of the building (1833 section) in 1911.

The entire exterior of the Merrill Magee House is sheathed with narrow clapboards.    The gable and shed roofs of the various sections are covered with slate.    The formal east elevation is dominated by a classical portico supported on square, paneled  columns.    The offset entrance consists of a six panel door within a molded classical entablature.   A simple frieze and cornice delineate the roofline, and pilasters define the corners and bays of the formal front.

Fenestration throughout the house is generally regular and symmetrical, consisting of regularly spaced openings hung with movable six-over-six wood sash.    The 1833 portion of the building exhibits half-story windows on the south elevation.    Many windows are hung with louvered wood shutters.

In addition to the main house and its landscaped grounds, the nominated property included  the following historic features prior to 1980.

Woodshed (ca. 1890) A utilitarian, one-story, shed-roofed frame structure sheathed with novelty siding, the building is located immediately northwest of the Merrill-Magee House and was used to store household firewood.

Ice House (ca. 1875) A one-story, gable-roofed structure sheathed with clapboards, the modest frame building was used to store bulk ice harvested during winter from the nearby Hudson River.

Smokehouse (ca. 1855) A small, six-foot-square brick structure with a slate roof, this minor dependency stands on a cut stone floor and foundation.

Garage/Servants’ Quarters (ca. 1925) A two-story frame building sheathed with clapboards, the building contains three round-arched garage bays on the first story    and servants’ quarters on the second story.    The building is covered by a slate gable roof.
An additional garage bay for agricultural equipment is contained in an -addition (ca. 1940) attached to the south corner of the larger garages.

Swimming Pool (1927-28) A poured concrete structure measuring 40 by 80 feet, this is believed to be one of the oldest and largest home swimming pools surviving in upstate New York.

Landscaping     The immediate surroundings of the house consist of landscaped grounds accented by ornamental shrubbery and shaded by large specimen maple and oak trees.    A scalloped board fence lined with matched Norway maple trees planted in the 1930's separates the nominated property from the street.

The Merrill Magee House is significant for its architecture and for its historical association with one of Warrensburg’s most prominent families for nearly 150 years.    Consisting of a frame, vernacular Greek Revival style farmhouse of the 1830's, a monumental Greek Revival style addition of ca. 1855, and a rear wing built c.1815.

The original house on the property was built in the early 1830's and acquired by Stephen Griffin II in 1838.    A leading industrial entrepreneur of the Warrensburg-Adirondack Region, Griffin owned and managed a series of tanneries, sawmills, and timber companies, achieving a reputation for his business acumen and personal integrity.    Stephen Griffin was also important for his civic career,which included serving three terms as town supervisor, election to the New York State Assembly, and appointment as state agent for timber lands in Warren and Hamilton Counties.    His vernacular Greek Revival style residence is significant as a reflection of regional architectural trends during the formative years of Griffin’s career in Warrensburg. With its half-story windows, broad porch, and finely crafted interior details, the house represents the typical middle-class residence of its region and period.

During the subsequent decades of prosperity for the Griffin family, the property underwent a gradual transition from farm to estate as lawn and garden areas were developed around the fashionable house.    After Stephen Griffin’s death in 1893 the house passed to his daughter Mary Merrill who only used the property as a summer home.  The house remained little altered until it was inherited by Grace Merrill Magee in the early twentieth century.     Grace Magee was a wealthy and sophisticated New Yorker who maintained a nostalgic  affection for her  ancestral home.
Like her parents, she used the Warrensburg house as a summer home, but under her ownership it was developed into a picturesque country retreat which combined such rustic delights as sheep-dotted meadows and fresh eggs with more sophisticated innovations, including a large swimming pool.    Because of her strong antiquarian and genealogical interests, Grace Magee  acquired a portion of the Griffin family homestead in Thurman, moving it to Warrensburg in 1912.    This vernacular Federal style structure was built ca. 1815  either by the first Stephen Griffin, a Revolutionary War veteran who settled Military Bounty lands at Thurman Station in 1800,  or by his son.

The continuity of family ownership from 1838 to 1979 helped to preserve   the integrity of the Merrill Magee House and its dependencies.    The land was divided many times during that period, and most of the Griffin property was separated from the house after Grace Magee’s death in 1979.    The nomination boundary was drawn to include all historic outbuildings and sufficient land to preserve the historic setting.  Now operated as a restaurant and inn, the house and grounds have been carefully preserved to reflect their place in local and regional history.  A more recent separate building was added for the bed and breakfast.
Powered by